In the Sanger method, the DNA strand to be analyzed is used as a template and DNA polymerase is used, in a PCR reaction, to generate complementary strands using primers. Four different PCR reaction mixtures are prepared, each containing a certain percentage of dideoxynucleoside triphosphate (ddNTP) analogs to one of the four nucleotides (ATP, CTP, GTP or TTP).

In 1976-1977, Allan Maxam and Walter Gilbert developed a DNA sequencing method based on chemical modification of DNA and subsequent cleavage at specific bases. The method requires radioactive labelling at one end and purification of the DNA fragment to be sequenced. Chemical treatment generates breaks at a small proportions of one or two of the four nucleotide based in each of four reactions (G,A+G, C, C+T). Thus a series of labelled fragments is generated,from the radiolabelled end to the first ‘cut’ site in each molecule. The fragments in the four reactions are arranged side by side in gel electrophoresis for size separation. To visualize the fragments,the gel is exposed to X-ray film for autoradiography,yielding a series of dark bands each corresponding to a radiolabelled DNA fragment,from which the sequence may be inferred.

The chain terminator method is more efficient and uses fewer toxic chemicals and lower amount of radioactivity than the method of Maxam and Gilbert. The key principle of the Sanger method was the use of dideoxynucleotide triphosphates (ddNTPs) as DNA chain terminators. The chain termination method requires a single-stranded DNA template,a DNA primer,a DNA polymerase, radioactively or fluorescently labelled nucleotides,and modified nucleotides that terminate DNA strand elongation. The DNA sample is divided into four separate sequencing reactions,containing all four of the standard deoxynucleotides(dATP, dGTP, dCTP, dTTP) and the DNA polymerase. To each reaction is added only one of the four dideoxynucleotide (ddATP, ddGTP, ddCTP, ddTTP) which are the chain terminating nucleotides, lacking a 3’-OH group required for the formation of a phosphodiester bond between two nucleotides,thus terminating DNA strand extension and resulting in DNA fragments of varying length. 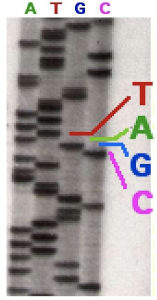 The newly synthesized and labelled DNA fragments are heat denatured , and separated by size by gel electrophoresis on a denaturing polyacrylamide-urea gel with each of the four reactions run in one of the four individual lanes(lanes A, T, G,C), the DNA bands are then visualized by autoradiography or UV light,and the DNA sequence can be directly read off the X-ray film or gel image. A dark band in a lane indicates a DNA fragment that is result of chain termination after incorporation of a dideoxynucleotide (ddATP, ddGTP, ddCTP, or ddTTP). The relative position of the different bands among the four lanes are then used to read (from bottom to top) the DNA sequence. The technical variations of chain termination sequencing include tagging with nucleotides containing radioactive phosphorus for labelling, or using a primer labelled at the 5’ end with a fluorescent dye. Dye- primer sequencing facilitates reading in an optical system for faster and more economical analysis and automation. Chain termination methods have greatly simplified DNA sequencing. Limitations include non-specific binding of the primer to the DNA,affecting accurate read-out of the DNA sequence,and DNA secondary structures affecting the fidelity of the sequence. 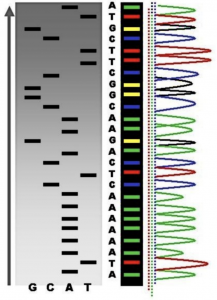 Automated DNA sequencing instruments (DNA sequencers) can sequence upto 384 DNA samples in a single batch (run) in up to 24 runs a day. DNA sequencers carry out capillary electrophoresis for size seperation,detection and recording of dye fluorescence,and data output as fluorescent peak trace chromatograms. A number of commercial and non-commercial software packages can trim low-quality DNA traces automatically. These programmes score the quality of each peak and remove lowquality base peaks (generally located at the ends of the sequence).

Current methods can directly sequence only relative short (300-1000 nucleotides long) DNA fragments in a single reaction. The main obstacle to sequencing DNA fragments above this size limit is insufficient power of separation for resolving large DNA fragments that differ in length by only one nucleotide. Large scale sequencing aims at sequencing very long DNA pieces,such as whole chromosomes. It consist of cutting (with restriction enzymes)or shearing (with mechanical forces) large DNA fragments into shorter DNA fragments. The fragmented DNA is cloned into a DNA vector, and amplified in E.coli. Short DNA fragments purified from individual bacterial colonies are individually sequenced and assembled electronically into one long,contiguous sequence. This method does not require any pre- existing information about the sequence of the DNA and is reffered to as de novo sequencing. Gaps in the assembled sequence may be filled by primer walking. The different strategies have different tradeoffs in speed and accuracy. 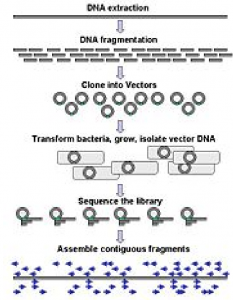 Fig.  Genomic DNA is fragmented into random pieces and cloned as a bacterial library. DNA from individual bacterial clones is sequenced and the sequence is assembled by using overlapping regions.

The high demand for low-cost sequencing has driven the development of high- throughput sequencing technologies that parallelize the sequencing process,producing thousands or millions of sequences at once. High-throughput sequencing technologies are intended to lower the cost of DNA sequencing . Molecular detection method are not sensitive enough for single molecule sequencing, so most approaches use an in vitro cloning step to amplify individual DNA molecules. In microfluidic Sanger sequencing the entire thermocycling amplification of DNA fragments as well as their separation by electrophoresis is done on a single chip (appoximately 100cm in diameter) thus reducing the reagent usage as well as cost. In some instances researchers have shown that they can increase the throughput of conventional sequencing through the use of microchips.

The first of the “next-generation” sequencing technologies, MPSS was developed in the 1990s at Lynx Therapeutics, a company founded in 1992 by Sydney Brenner and Sam Eletr. MPSS is an ultra high throughput sequencing technology. When applied to expression profile, it reveal almost every transcript in the sample and provide its accurate expression level. MPSS was a bead-based method that used a complex approach of adapter ligation followed by adapter decoding, reading the sequence in increments of four nucleotides; this method made it susceptible to sequence-specific bias or loss of specific sequences. However, the essential properties of the MPSS output were typical of later “next-gen” data types, including hundreds of thousands of short DNA sequences. In the case of MPSS, these were typically used for sequencing cDNA for measurements of gene expression levels. Lynx Therapeutics merged with Solexa in 2004, and this company was later purchased by Illumina.

It is an inexpensive but highly accurate multiplex sequencing technique that can be used to read millions of immobilized DNA sequences in parallel. This techniques was first developed by Dr. George Church in Harvard Medical college. It combined an in vitro paired-tag library with emulsion PCR, an automated microscope, and ligation-based sequencing chemistry to sequence an E. coli genome at an accuracy of > 99.9999% and a cost approximately 1/10 that of Sanger sequencing.

A parallelized version of pyrosequencing was developed by 454 Life Sciences, which has since been acquired by Roche Diagnostics. The method amplifies DNA inside water droplets in an oil solution (emulsion PCR), with each droplet containing a single DNA template attached to a single primer-coated bead that then forms a clonal colony. The sequencing machine contains many picolitre-volume wells each containing a single bead and sequencing enzymes. Pyrosequencing uses luciferase to generate light for detection of the individual nucleotides added to the nascent DNA, and the combined data are used to generate sequence read-outs.This technology provides intermediate read length and price per base compared to Sanger sequencing on one end and Solexa and SOLiD on the other.

Solexa developed a sequencing technology based on dye terminators. In this, DNA molecule are first attached to primers on a slide and amplified, this is known as bridge amplification. Unlike pyrosequencing, the DNA can only be extended one neucleotode at a time. A camera takes images of the fluorescently labeled nucleotides, then the dye along with the terminal 3′ blocker is chemically removed from the DNA, allowing the next cycle.

It is high throughput sequencing technology that is used to determine the entire genomic sequence of an organisms. The method uses rolling circle replication to amplify fragments of genomic DNA molecules. This DNA sequencing allows large number of DNA nanoballs to be sequenced per run and at low reagent cost compared to other next generation sequencing platforms. However, only short sequences of DNA are determined from each DNA nanoball which makes mapping the short reads to a reference genome difficult. This technology has been used for multiple genome sequencing projects and is scheduled to be used for more.

Helioscope sequencing uses DNA fragments with added polyA tail adapters, which are attached to the flow cell surface. The next steps involve extension-based sequencing with cyclic washes of the flow cell with fluorescently labeled nucleotides. The reads are performed by the Helioscope sequencer. The reads are short, up to 55 bases per run, but recent improvemend of the methodology allowes more accurate reads of homopolymers and RNA sequencing.

SMRT sequencing is based on the sequencing by synthesis approach. The DNA is synthesisd in so calles zero-mode wave-guides (ZMWs) – small well-like containers with the capturing tools located at the bottom of the well. The sequencing is performed with use of unmodified polymerase and fluorescently labelled nucleotides flowing freely in the solution. The wells are constructed in a way that only the fluorescence occurring by the bottom of the well is detected. The fluorescent label is detached from the nucleotide at its incorporation into the DNA strand, leaving an unmodified DNA strand. The SMTR technology allows detection of nucleotide modifications. This happens through the observation of polymerase kinetics. This approach allows reads of 1000 nucleotides.

This method is based on RNA polymerase (RNAP), which is attached to a polystyrene bead, with distal end of sequenced DNA is attached to another bead, with both beads being placed in optical traps. RNAP motion during transcription brings the beads in closer and their relative distance changes, which can then be recorded at a single nucleotide resolution. The sequence is deduced based on the four readouts with lowered concentrations of each of the four nucleotide types.

Sequencing by hybridization is a non-enzymatic method that uses a DNA microarray. A single pool of DNA whose sequence is to be determined is fluorescently labelled and hybridized to an array containing known sequences. Strong hybridization signals from a given spot on the array identifies its sequence in the DNA being sequenced. Mass spectrometry may be used to determine mass differences between DNA fragments produced in chain-termination reactions.

Some important applications of DNA sequencing are :

1. To analyse any protein structure and function we must have the knowledge of its primary structure i.e its DNA sequence.
2. With its study we can understand the function of a specific sequence and the sequence responsible for any disease.
3. With the help of comparative DNA sequence study we can detect any mutation.
4. Kinship study.
5. DNA fingerprinting.
6. By knowing the whole genome sequence, Human genome project get completed.

The main problem with sequencing is its intactness. If we perform the sequencing of same sample with different methods the result may be different so we should have to do it in such a manner that atleast 40-50% sequence must be same of similar sample.